A virtual visit to the Age of Dinosaurs

In celebration of L.A.'s vibrant and diverse community of Angelenos, NHM presents the American Sign Language (ASL), Dinosaur Hall virtual tour. We invite you to step inside NHM’s award-winning Dinosaur Hall and discover the Age of Dinosaurs from the comfort of your home. Learn how Museum scientists study our ancient past through a variety of fossils and get an up close look at a one-of-a-kind T. rex growth series.

You can also discover dinosaur and fossil activities that complement the tours — suitable for families, school-age children, and learners of all ages! See below.

Pro Bono ASL is a Community Partner of NHM (What's this? Learn more). 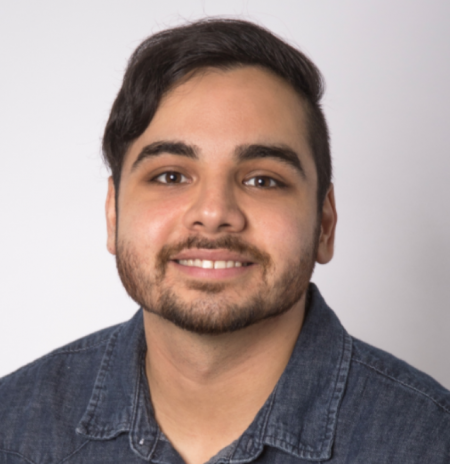 Eduardo Ayala was born in Los Angeles, California after his parents immigrated from a small town of Purépero de Echaíz, Michoacán, Mexico in 1989. It wasn’t until the age of three that Eduardo’s bilateral hearing loss was identified. Subsequently, he attended schools with Deaf and Hard of Hearing programs, where he became part of the Deaf Community. Eduardo received his B.A degree in Psychology from University of California, Riverside. Eventually, he earned his M.A degree in Sign Language Education from Gallaudet University. Currently, Eduardo is an ASL instructor at Rio Hondo College and Santa Ana College, as well as a member of Signs for Humanity and Deaf Latinos y Familias Organization. In his spare time, he likes to exercise, spend time with his two cats, and engage in new activities. 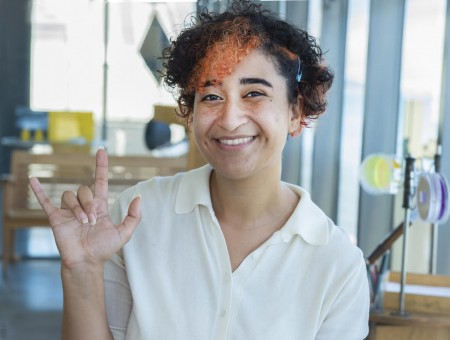 Born and raised in the San Francisco Bay Area, Lavender-Cygnet de Julia spent most of her time exploring the arts and activism that created the Bay. Being a CODA (Child of Deaf Adult), provided Lavender with a unique perspective on how elevated art spaces and institutions could be if they were accessible for the Disabled Community and Creatives within. Now, serving as an Accessibility Consultant for Museums and Cultural Institutions, Lavender has had the privilege of connecting with cultural spaces like the Natural History Museum all over the nation. The opportunity to work with Pro Bono ASL has contributed dynamically to Lavender’s consulting work, and she is ultimately grateful that Pro Bono ASL has provided an even greater platform to connect folks with lived experience, to institutions and organizations that are ready to make access a priority. 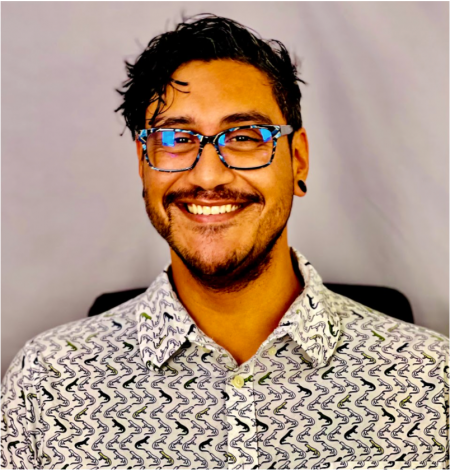 Neil is a first generation Californian, born of Salvadorian immigrant parents, here in Los Angeles. As an adult he met and became friends with some members of the Deaf community, who taught him ASL. After many years of interacting with Deaf people, he entered the field of ASL Interpreting and has worked in that capacity for the past 13 years. Last year presented Neil with a new and important opportunity: interpreting the COVID-19 press conferences for Los Angeles County from both English and Spanish into ASL.

Social justice issues are a priority for Neil, and beginning last year during the city wide demonstrations, Neil and fellow interpreters took to the streets to provide ASL access for Deaf protestors. Together, they formed an organization called Pro Bono ASL, with the vision of making accessibility the norm in every situation. Taken from the Pro Bono ASL’s self-penned Humanifesto: “We work to create a world where access to information, communication, and the social revolution is a priority. We envision a world where the often overlooked inclusion is the norm.“

Working to help spotlight the Deaf Community and fighting for equitable access have always been a priority for Neil. He looks forward to helping make Los Angeles the most ASL accessible city in the country.

ACTIVITIES FOR SCHOOL CHILDREN AND FAMILIES

Make Your Own Trace Fossil (with parent help)

Make Your Own Dinosaur Shadow Puppet and Screen  (with parent help)

Explore natural and cultural heritage of L.A., and stories from Angelenos who work to build community, inclusivity, and access.

Explore the Age of Dinosaurs (and see how scientists discover them) in our award-winning exhibition!