Inspiring girls to wield the power of their pen.

Angelenos Building Community is a series of stories from a diverse range of Angelenos and the work they do in support of their community in Los Angeles. The Natural History Museum of Los Angeles County is committed to uplifting the voices of community members who strive to create an equitable, accessible, and inclusive community for all. 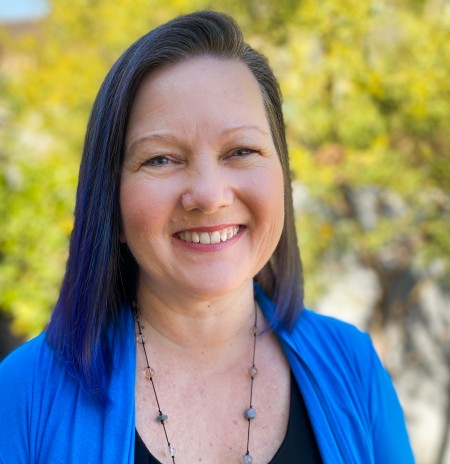 WriteGirl Executive Director, Keren Taylor, founded WriteGirl in 2001 and oversees all activities of the organization. An afterschool program director and trainer for more than 25 years, Keren has led WriteGirl’s expansion into a thriving community that helps hundreds of youth annually. In 2013, WriteGirl received the National Arts and Humanities Youth Program Award, the highest national honor awarded to exemplary after-school programs. Under Keren’s direction, WriteGirl has published 35 award-winning anthologies of youth writing, and in 2020, Keren received the Los Angeles Times Innovator’s Award, “spotlighting efforts to bring books, publishing and storytelling into the future.” Keren is a 2014 CNN Hero and has received the Humanitas Prize, the President's Volunteer Call to Service Award and commendations from the Los Angeles mayor’s office. WriteGirl is a founding member organization of the Arts for Justice and Healing Network (formerly Arts for Incarcerated Youth Network) for which Keren has served as a board member. In 2018, Keren became one of 12 women leaders and entrepreneurs invited to serve as a member of the Barbie Global Advisory Council to help shape Mattel, Inc.’s “Evolution of Barbie.” Keren holds a Bachelor’s Degree in International Relations from the University of British Columbia, a Piano Performance Degree from the Royal Conservatory of Music, Toronto, and a Diploma from the American Music and Dramatic Academy, NYC.

Learn more about WriteGirl and their free youth programs at writegirl.org.

Keren shares how she connects to community in L.A.

What would you want people to know about your organization and how it builds community?

WriteGirl is about creative writing, but it’s also about building confidence. WriteGirl leverages the skills of hundreds of women writers to help teen girls and nonbinary youth discover the power of their creative voice. At our workshops, we have 200 mentors and teens writing together and supporting each other, creating a much-needed positive community during a challenging and unprecedented time.
Photo Credit: Nicole Ortega

What is a program or event that speaks most directly to your organization's mission?

Our one-on-one weekly mentoring program is at the heart of our mission. We currently have 110 teens who are paired with a mentor for weekly one-on-one online mentoring sessions. Mentors can give a teen the confidence to share their voice with the world.
Photo credit: Nicole Ortega

Who are the people who comprise your organization or community?

WriteGirl volunteers are journalists, songwriters, poets, screenwriters and business writers, who work with our teens at monthly creative writing workshops, one-on-one mentoring sessions and workshops that prepare our juniors and seniors for college. Our mentees are teens between the ages of 13 and 18 who live throughout the Greater Los Angeles area.
Photo Credit: WriteGirl

What innovative programs have been created by you and/or your community to connect to each other during the pandemic?

Since the beginning of the pandemic, we have transitioned our programming to be entirely online. We host monthly online creative writing workshops with an average attendance of 200, and we bring in special guests who include local writers, musicians and performers. We also offer small group sessions to give teens and our alums more opportunities to connect.
Photo Credit: WriteGirl

From your perspective, what concerns your community the most?

We are very concerned about the impact of the pandemic on our teens, who are isolated, and experiencing a range of emotions from anxiety to loss to depression. It is difficult for all of us to be doing all our convenings online, but we can see how it is tremendously helpful for our young members.
Photo Credit: WriteGirl

What has your community taught you?

When the pandemic started, we did wellness phone calls to all our members, and we incorporated self-care into all our events and gatherings. We asked a lot of questions and adapted our programs to be responsive to our teens. The power of listening is enormous. We are here for our teens and it is inspiring for our whole community when we see their smiles and laughter at our events.
Photo Credit: Nicole Ortega

How did you become invested in this work?

As a singer/songwriter in the 90’s in New York City, I was invited to lead some songwriting workshops for teens in public schools. When I saw teens become excited to write and share their ideas and stories, I really wanted to do more of that – I wanted to help more teens discover the power and energy in expressing their views and voices.
Photo Credit:  Miranda Suess

Has anyone inspired you in this work or paved the way?

I’m inspired every day by our volunteer mentors. They are poets, songwriters, journalists, novelists, screenwriters, bloggers. I love their thoughtfulness and generosity. I love their collaborative energy, and watching them all advance through their careers as writers. They inspire me.
Photo Credit: Erin Dorothy

How do you build community in Los Angeles?

Every day, our staff and our leadership is in conversation with our volunteers, our teens, our parents and our partners. Community is built slowly, over time, with an open heart. Especially now, it’s important to ask, “how are you doing?” and really take time to listen to the answer and be present for that part of the conversation. It matters. We are not all doing fine, and we need to be able to talk about that to each other.
Photo Credit: Jenny Rolapp

What kind of community do you want to live in?

Wouldn’t it be great if we could be positive, kind and helpful with each other? Wouldn’t it be lovely to live in a community where individual creativity was championed and valued? Wouldn’t it be great if our differences could be welcomed and respected? That IS the community of WriteGirl, and it is where I love to live!
Angelenos Building Community: Celebrating Celia Ward-Wallace, South LA Cafe
Building community and connection through coffee in South L.A.
Read more
Angelenos Building Community: Celebrating Pastor Donavan Childs
Reflections on L.A. History: A Mexican Perspective mural
Read more
Share: Share page on facebook Tweet this page