Understanding the coronavirus pandemic and COVID-19, which has killed more than 600,000 people globally, raises big, difficult questions, magnified by the urgent need for answers. When science looks at complicated questions, it draws on a diverse array of expertise.

“We rely on the expertise of our collaborators when we do science, and during the pandemic we need to rely on the expertise of public health officials who have spent their careers gaining and refining a deep understanding of human diseases and epidemiology,” says Trina Roberts, NHMLAC’s Associate Vice President for Collections. Right now, health officials and the science undergirding their decisions tell us that wearing masks and physical distancing are essential to interrupting the chain of infection, the person-to-person transmission of the virus. In the early days of the pandemic, information seemed to come in blindingly fast: masks were ineffective one day, essential the next. New data helps us see more—but not necessarily more clearly—at least at first. Scientists are especially comfortable with handling this kind of uncertainty. “Because we’re used to scientific data early in a project being messy and contradictory, we’re also comfortable with some changes in the guidance we’re hearing from medical experts. This can be frustrating, but we’re watching them learning more about this virus along with us. Learning through science can be like putting together a big jigsaw puzzle section by section. At the beginning you make some mistakes and think you’re seeing contradictions, but as each piece fits in you understand more about the whole picture,” Roberts says.

"If I am concerned about a particular pathogen, I will wear gloves and a mask, which can be very uncomfortable in hot and humid places and makes specimen sampling and preparation challenging." Kayce Bell

"When a new pathogen emerges, there are many unknown elements, so scientists and health officials have to work with what they know to prevent the spread, but will update best practices as they learn more. I advise others to listen to health officials that are following the best-practice guidelines issued by the CDC and the World Health Organization, as they are working to update guidelines based on the best information available."

Kayce Bell, NHMLAC’s Assistant Curator of Mammalogy says new data can reframe our understanding, and that’s a good thing: “What we are experiencing right now is a good example of science in action; scientists use the data that are available to try to understand a phenomenon (such as how SARS-CoV-2 is spread), but they know that, with new data, our understanding of a phenomenon may change.” Some of those data, she says, can be found on museum shelves.

A deer mouse from NHM's Mammalogy Collection. "Museum collections with appropriate samples and adequate data can be used to identify the reservoirs of zoonoses (wild animal diseases that can be transmitted to humans), which is why support for collections and data infrastructure are critical." Kayce Bell

The 1993 emergence of lethal respiratory illness in the American Southwest sent scientists into action and into natural history museums. “Museum collections (frozen tissue samples in particular) were used to determine that the Sin Nombre hantavirus had been present in wild deer mouse populations for at least 14 years before it was described as a disease in humans,” Bell says. This shaped our understanding of the disease; instead of dealing with an escaped military bioweapon, an idea floated by Scientific American at the time, museum collections revealed a virus endemic in the environment. Big questions remain, but museum collections helped researchers focus on the right ones.

“Knowing where a virus came from allows us to work to prevent other potential outbreaks. For example, caution and guidelines can be issued when interacting with the wild animal reservoir host,” Bell says. While the hantavirus remains deadly serious, scientific expertise and museum collections helped better define the danger, specifically deer mice feces, urine, and saliva. When they encounter mice, now people have scientifically supported ways to keep themselves and others safe. As windows to the past, records preserved by natural history museums helped us contextualize a newly described disease and act accordingly. Humanity can consciously draw on wells of historic data to better inform our decisions and defend ourselves against disease. Other species don’t have that option.

"The sheer quantity of knowledge and the often complicated results mean that one needs a certain amount of expertise and background to fully understand the current state of the field. Luckily, our public health officials have this background themselves, or work with scientists and advisors who do."

Around the country, you can find house finches scratching at swollen, red, and crusty eyes; some may have gone blind, in the worst cases. If the birds could practice physical distancing, they might be able to slow the spread of this deadly eye disease. 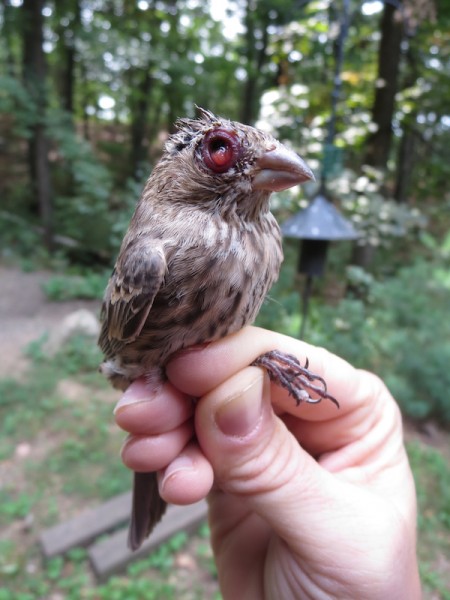 A house finch suffering from Mycoplasmal conjunctivitis. "The only way that wild animals combat bacteria and viruses is by natural selection and evolution; those individuals that have the genetic background to survive the disease are the ones that survive and reproduce." Allison Shultz

“We know that one of the main ways that Mycoplasmal conjunctivitis spreads is through social contact, especially at bird feeders,” says Allison Shultz, NHMLAC’s Assistant Curator of Ornithology. It’s an epizootic (think epidemic or pandemic for animals). One difference between pandemics and epizootics: human disease travels faster and further, hitching rides with us on the boats, planes and other transit systems we use to cross continents and oceans. Having started in the Eastern U.S. population, it took ten years for the eye disease plaguing house finches to make its way to the Western U.S.. Another difference is that epizootics, or at least the ones we notice, usually have much higher mortality rates. The eye disease had a 60-percent mortality rate in eastern house finch populations.

A drawer of house finches from the NHM Ornithology Collection. "I am using house finch museum specimens as a time machine to understand how house finches have evolved in response to this new pathogen." Allison Shultz

Advances in science and medicine offer a different path forward when dealing with human pandemics, a chance to avoid the destruction epizootics often level on animal populations. “The only way that wild animals combat bacteria and viruses is by natural selection and evolution; those individuals that have the genetic background to survive the disease are the ones that survive and reproduce,” says Shultz. While researchers and community scientists are monitoring its spread, the disease will continue to devastate house finches, leaving untold numbers of them blind and dead. “We, on the other hand, have the self-awareness and the knowledge to take measures to protect ourselves and others using scientifically proven measures like face masks,” says Shultz. Scientific expertise can help us see where we need to go next.