He may only weigh about a third of a pound, but this Museum resident packs a big personality punch.

He may only weigh about a third of a pound, but this star of NHMLAC's Live Animal Program packs a big personality punch. Odin, the Western screech-owl, came to us as a rescue with a severely injured right eye, most likely the result of a vehicle collision.

“He’s lucky he was found,” says Leslie Gordon, Manager of the Vertebrate Live Animal Program, who worked together with veterinarians and bird experts to remove the damaged eye and begin rehabilitating him at the museum. Any raptor (predatory bird) that comes to us must be a rescue and non-releasable either due to injury or imprinting on humans. Odin’s injury would make it extremely difficult for him to survive in the wild, as owls rely on their impeccable eyesight to catch their prey. 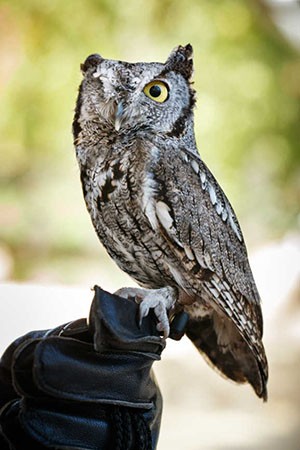 Live Animal Program staff trained Odin to help him get used to his new home. Odin has become accustomed to people, starting with museum staff and eventually working his way up to large groups of guests. Odin enjoys time each day in his outdoor mew, a large enclosure that allows him more freedom offlight and motion.

“Because he’s a wild owl, it’s good for him to be able to hear sounds from the outside and get fresh air on his face,” Gordon says. Indoors, the Live Animal Program team makes sure Odin has daily enrichment, including the rearranging and variation of his perches, which is crucial for owl foot health.

Odin’s eye injury is just one example of human consequences for the lives of local owls. Owls commonly ingest poisons intended to eradicate rodents. Habitat loss and urban expansion can also lead to unfavorable run-ins between humans and local animals. Gordon says they are all excited to develop the museum program with the help of a native owl. “Odin is going to be an incredible ambassador for Los Angeles wildlife,” she says. “And we hope that meeting him will inspire our visitors to care for our local predators.”