More than a decade of rich digs at Project 23

MORE THAN A Decade of Rich Digs at Project 23

More than a decade ago, in the summer of 2006, La Brea Tar Pits got a big, prehistoric present— monstrous boxes containing tons of Ice Age treasures that visitors can still see excavators “unpack” every day. During the construction of the Los Angeles County Museum of Art’s underground parking garage, a bounty of fossil material was discovered in deposits that filled 23 massive wooden “tree” boxes. The Tar Pits have been excavated, downward, for more than 100 years, but this excavation— Project 23—is happening above ground, revealing discoveries that visitors can experience every day. 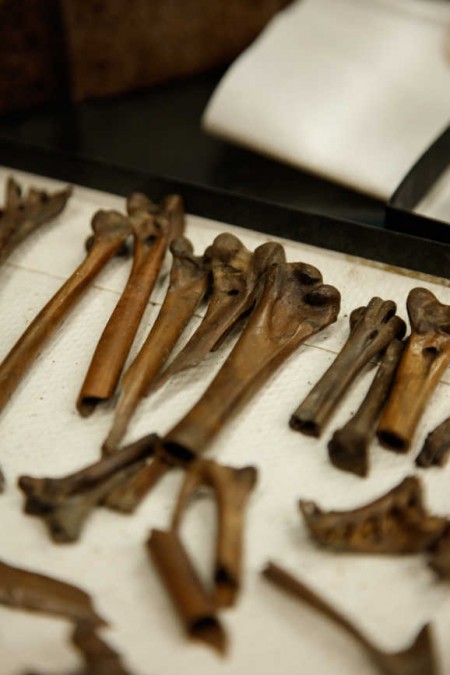 Renowned as one of the world’s richest deposits of Ice Age fossils, the prehistoric jackpot at La Brea Tar Pits includes—so far—600 species of animals including dire wolves, ground sloths, and saber-toothed cats. A prized discovery in Project 23 was the near-complete skeleton of a Columbian mammoth nicknamed “Zed.” Project 23’s fossil haul alone is poised to double the museum’s collection of about 3.5 million specimens, filling out the scene of which once-mighty giants rumbled along Mid-Wilshire as long as 55,000 years ago.

Dr. Emily Lindsey, Assistant Curator at La Brea Tar Pits, says this dig is extraordinary because the daily discoveries are shared with visitors both outside and inside the museum. “The ability for the public to actually see the entire process of paleontology in one place—the discovery, the excavation, the preparation, and the research on the fossils,” Lindsey says, “it’s unheard of almost anywhere else in the world.”

WHAT’S IN THE BOX?

An active excavation site in the heart of L.A. starts something like this: museum excavators, on raised platforms behind wire fences, start their dig by laying a grid over the fossil deposit. Then they pick a tool: hammers and chisels on hard areas without fossils, and dental picks otherwise. Finding whole skeletons is rare because bones from different animals tend to be jumbled together. While it’s thrilling to discover the bones of mammoths, dire wolves, and saber-toothed cats in that asphalt tangle, the storehouse of microfossils around those bigger beasts is just as scientifically monumental. When these carnivores, in pursuit of a meal, got mired in the Tar Pits death trap and died, they attracted swarms of scavengers and leafy passengers. Tens of thousands of tiny fossilized organisms are found in between the intertwined bones, including bits of reptiles, amphibians, fish, insects, rodents, freshwater mollusks, and plants. These microscopic clues, such as beetle wings, seeds, and tiny teeth, are helping to open a window into the ecosystems of Ice Age L.A. before and after the coldest snap around 20,000 years ago and when the climate was starting to heat up.

The ability for visitors to actually see the entire process of paleontology in one place— the discovery, the excavation, the preparation, and the research on the fossils . . . it’s unheard of almost anywhere else in the world.” 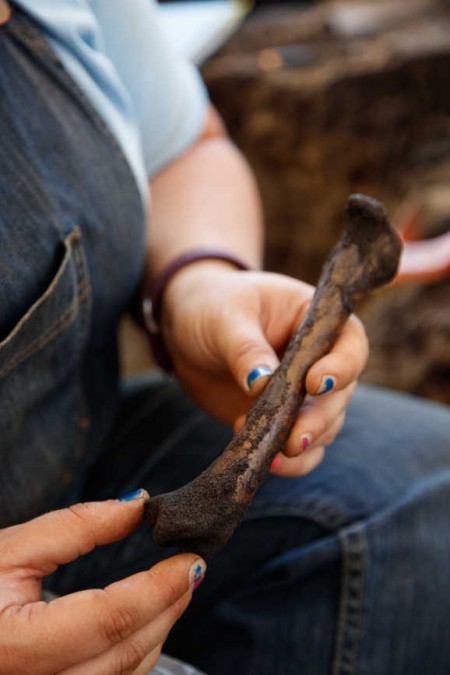 INSIDE THE FOSSIL LAB

Visitors will get a close-up view of La Brea Tar Pits crew cracking open that window into the Ice Age in the glass-enclosed Fossil Lab. Look out for an ever-changing whiteboard that shows what is being cleaned, sorted, and prepared for research that day. Visitors who look inside will see paleontologists and volunteers using solvents to remove hardened asphalt and dirt (or matrix) from bones and dental picks to dislodge grains. The Fossil Lab crew also examines specimens under microscopes that have been positioned just below the glass walls for visitors to see. Every specimen, from a mammoth tusk to a baby mouse’s tooth, is catalogued, tagged, and added to the collection. That industrious preparation is a boon for researchers around the world. The quality and quantity of specimens help us to understand more about species’ responses to changes in climate and ancient biodiversity. Investigations, for instance, can help paint a death trap “scene” to estimate how long it took for prehistoric animals to become submerged in the tar. The L.A. Basin is part of a biodiversity hotspot and could have been in the Ice Age as well, says Lindsey, something more decades of digging could reveal.

“Project 23 is incredibly rich. Densely packed and beautifully preserved with fossils, big and small, it gives us a way to look into ecosystems that thrived here in Los Angeles more than 35,000 years ago,” says Aisling Farrell, Collections Manager at the museum at La Brea Tar Pits. “Who knows what interesting insights we will get about how plants and animals responded to the changing climates in the past. It’s very exciting.” 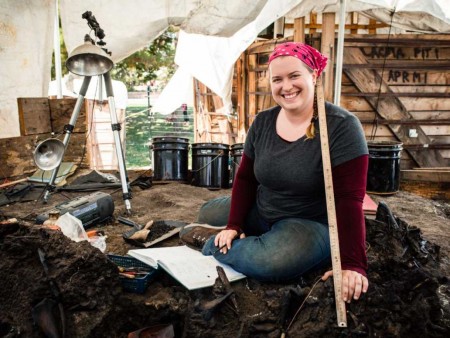 Every workday, Laura Tewksbury gets up at 4:30 am to drive from her home 75 miles away to dig for fossils at La Brea Tar Pits, excited about what Ice Age discoveries that day will bring. “Every single grain of sand I move, I get to be the  first human being to see what’s behind it,” says Tewksbury, a fossil preparator who started at the Tar Pits a decade ago, the year Project 23 began. “That constant sense of discovery, digging for buried treasure in the middle of Los Angeles and getting people excited about science, that never gets old.”

Of the well over 50,000 fossils excavated from Project 23, Tewksbury’s standouts include three “super rare and so cute” saber-toothed kitten sabers unearthed in one day in Box 1. But if she had to pick a favorite find from among the jumbled-up menagerie, the dwarf pronghorn is it. That is, she says, because modern pronghorns are the second-fastest land animal, behind the cheetah.

Tewksbury’s focus now is Box 14, where excavators have dug down six feet into the 86,000-pound deposit (on and off) since 2010. It’s a herculean task performed in slow motion. Under a canopy that shields them from the sun, a small crew sits atop the mound of tar and uses dental picks and other tools to reveal the prehistoric bones. Their methodical work only stops for lightning storms or the occasional strong rain. So far, Box 14 has yielded plenty of cool finds, including bones of an adult dire wolf, one baby mastodon, one baby camel, and one adult bison—all creatures that roamed and got stuck in asphalt approximately 40,000 years ago.

Standing by the giant wooden box in the shade, Tewksbury dreams about being able to tell the dramatic story of one individual animal that got stuck in the asphalt seeps. Only if the specimen is rare or young, has an injury, or is diseased, however, can it be said with scientific confidence that one bone is a match with another. But that match game is ongoing.

“All of these species were wandering around here—geologically speaking, last weekend—and we’re still not exactly sure why they’re not anymore,” she says. “I’d love to be able to track their stories and learn more about what happened to them.”

The magnificent array of fossil animals and plants from the Tar Pits offers us the opportunity to understand how ancient ecosystems fared in the face of climate change, a critical lesson for the present and future of Los Angeles.”

A Tally of What Got Stuck

Of the more than 50,000 Ice Age fossils dug up in Project 23 (of which almost 28,000 have been catalogued), exceptional specimens include saber-toothed kittens, a partial skeleton of a baby American mastodon, and a semi-articulated camel. Other noteworthy dig stats: