The Cat Came Back

After a detour through Silver Lake, P-22 is back on his home turf—Griffith Park.

On Tuesday, March 8, 2022, the 12-year-old mountain lion traveled 3-plus miles from the park into residential neighborhoods not far from the Silver Lake Reservoir.

After stupefying a couple of residents and hiding for two days, the puma traversed the city streets back to his parkland habitat by Thursday morning. Miguel Ordeñana, an esteemed wildlife biologist and NHMLAC’s Community Science Manager who has a special bond with P-22, welcomed the news of his return. 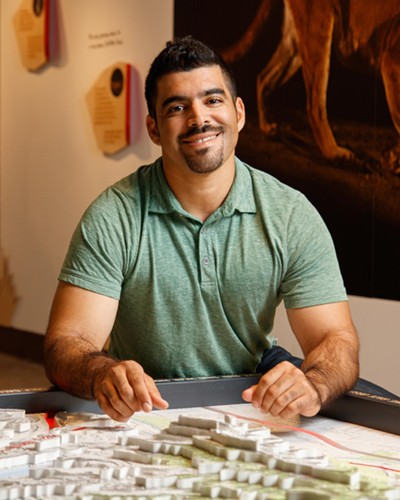 Ordeñana was the first person to spot P-22 in 2012 while working on a study about how the wildlife in the massive urban park connects to the rest of the city. At that time, Ordeñana set out motion-sensing camera traps through the Griffith Park Connectivity Study to collect images of wild creatures and, on one evening that February, he came across a snapshot of the fetching feline. The Santa Monica Mountains National Recreation Area captured the cat, whose weight ranges between 120 and 130 pounds, and attached a GPS collar. They have been tracking his journey ever since. Here’s more from Ordeñana about this beloved L.A. neighbor.

First off, how do you feel about P-22’s return?
I am so happy and relieved! Because I care about him a lot and didn’t want him to go out this way. Nobody knows how he got back through the streets without getting into trouble or being hit by a car. He’s smart and also really lucky. I’m sure he was making an effort to get back, but got delayed as he ran into people, but thankfully he was able to power through it.

How can you explain why he might have left the park?
Hard to know what is going through his head. It’s all speculation why he left the park and went so far south. He could be perfectly healthy and was lured by an easy raccoon snack and he got trapped by people. Then went scrambling around to find a vacant lot or a dark patch of green space with cover. It's concerning because it’s the furthest into the urban core he’s ever gone.

What things can people do to help P-22 stay safe if he shows up in their neighborhood?
If they are a fan and want to get a picture, it might make him feel cornered, followed, and unsafe, and he could dart across the street hit by a car. People can unintentionally put him in danger. We need to get the word out that Griffith Park is where he mainly lives, but sometimes he’ll go into neighborhoods and roam. It doesn’t mean he’s become habituated to us or is aggressive. If we care about the animals, we need to give them their space. Also, the more you can keep your pets indoors or make sure they have enclosures, that will keep your property and wildlife safe.

The famous feline managed to avoid paparazzi – a feat for any L.A. celebrity – and key to P-22's safety.

Similarly, we should all be relieved that P-22 avoided any traffic incidents during his journey.

The famous feline managed to avoid paparazzi – a feat for any L.A. celebrity – and key to P-22's safety.

Similarly, we should all be relieved that P-22 avoided any traffic incidents during his journey.

Can you talk about wildlife corridors and why are they important?
The Wallis Annenberg Wildlife Crossing will be unique. The attention that crossing gets will inspire conservation leaders and leadership in general to be supportive of habitat connectivity. Making it easier for animals to cross all of our freeways is something we should invest in. If we wait too long it’s hard to do that retroactively. As we add more lanes or more development up against the freeway we need to consider wildlife and habitat connectivity first. It’s the only place where there’s protected open space on either side of the 101 freeway. It’s been a challenge to keep contiguous habitat protected all the way up to the edge of a freeway, especially on both sides. The L.A. River is not only habitat but also a valuable corridor, and much safer to go through than residential neighborhoods when traveling from one patch of green space to another. That is what I hope people think about in the future, now that we are revitalizing the L.A. River. The more accommodating we can be, the better and the longer they will be able to sustain themselves for years to come.

The same extensive freeway system that makes driving in L.A. convenient (in theory) makes it hard for mountain lions like P-22 to survive while finding mates and meals.

What role do city lights play in their safety?
These animals are shy; they will choose an area that’s darker than one that has more light even if it’s easier. Dark areas keep them safe and are helpful for ambush predators like mountain lions. They like to be in the darkness, where they can wait for a deer to be really close before they chase it down, so their energy cost is minimized. There's a really interesting study about this that plots a hypothetical path to Griffith Park, making the assumption P-22 (and other lions) take the shortest/darkest path across the landscape.

What advice would you give someone who comes upon the mountain lion?
For P-22, if you see him, slowly go the other way and keep your distance. Go back in your car or house. Never run away. Don’t crouch down because you’ll look like prey. Don’t stare. He has proved time and time again that he has no interest in people. If he seems to walk toward you and likely he never will, then it’s time to make noise and look big.

Why is being famous a little hazardous?
In this situation, if someone had taken a video of him that could be interpreted as him being aggressive and was put on social media, the authorities might have felt compelled to take action. Even trapping him for relocation would be stressful and comes with risk for all involved and is not taken lightly by wildlife officials. If animals are a perceived threat to human safety, it can quickly go from a non-issue to causing an animal to die. It’s easy to put large predators in danger due to the varying ways people perceive them as threats to human safety for just being predators. The actual threat is largely determined by our behavior around them since these animals are not naturally aggressive or interested in being near humans. We’re all very relieved he made it back. Hopefully, being around all the activity and paparazzi will haze him to the point that he won’t go back.

What else is unique about P-22?
At between 12 and 13 years old, he’s the oldest mountain lion in the study of over 100 mountain lions since the Santa Monica Mountains National Recreation Area began their study in 2002. It’s also unprecedented because of how small and urban his territory is.

Is being an L.A.-based cat a plus?
L.A. in general is unique with respect to how accommodating and compassionate people are to wildlife. He wouldn’t have survived this long if this wasn’t happening in Los Angeles.

The danger of P-22's L.A. story highlights the need for more wildlife corridors like Liberty Canyon.

Photo of P-22, the Griffith Park mountain lion taken Dec. 2018 shortly before his 7th anniversary in the park.

The danger of P-22's L.A. story highlights the need for more wildlife corridors like Liberty Canyon.

Photo of P-22, the Griffith Park mountain lion taken Dec. 2018 shortly before his 7th anniversary in the park.

Explore the fascinating world of L.A.'s urban wildlife at NHM's Nature Lab and learn all about our city's most famous big kitty at our P-22 exhibit.