A week's worth of spotlighting species (and some ways you can help) in recognition of California's Biodiversity Week, September 3-11, 2022.

Los Angeles is at the center of the movie business, but flora are the real stars.

An unusually high number of native plants makes the area from Baja California to southern Oregon so important: around 3,400 species of plants are found in the region known as the California Floristic Province, basking in the area’s Mediterranean climate and nowhere else. L.A. is smack dab in the middle of all that biodiversity, and between its mountain ranges, iconic coasts, and mild weather, it is prime real estate for a ton of amazing animals, but only one species makes the region—and our city—part of a global biodiversity hotspot.

While they might sound like nightclubs for animals, biodiversity hotspots are places on Earth that have at least 1,500 endemic species of plants and have lost 70 percent of the region’s original habitat. From the Indonesian archipelago to the Peruvian Andes, the 36 hotspots around the globe represent an incredible spectrum of our planet, all threatened by the same species of hominid: humans.

If you don’t immediately connect urban L.A. with, say, the rainforests of Borneo, you’re not alone. We humans have evolved incredibly acute vision for fine details—likely thanks to our tree-faring ape ancestors—but seeing fine details can mean missing the big picture. Biodiversity is incredibly complex with species relying on species in ways we can barely understand on a landscape we’ve drastically changed over the 15,000 years or so of human habitation (at least in the Americas). Delicate, complex ecological connections have been grazed on, burned down, paved over, and dug up. So how do we know what our natural ecosystems should look like?

Since 2020, California has been trying to address the staggering loss of habitat, currently focusing on conserving 30% of the state’s wild land and water by 2030 (30x30). With specimens stretching over a hundred years, collections of animal specimens like NHMLAC’s tell the story of what’s been lost to modern development. La Brea Tar Pits captures the region's natural history before the arrival of humans, painting a picture of how our natural world worked without our preconceptions.

Community science projects document what’s happening right now with our urban nature, bringing more fine details into focus than any single hominid could hope to capture on their own. Community scientists can reach places researchers might not—private property, for example—making massive surveys of our disparate landscape possible. Together, these institutions, projects, and passionate folks explore the vanished and vanishing habitats of our region so that we can better preserve and restore L.A.’s natural spaces.

This year in recognition of California’s Biodiversity Day on September 7, members of NHM’s Urban Nature Research Center are spotlighting species to tell some of L.A.'s biodiversity story and what we can do to conserve and protect the incredible animal and plant life all around us.

Jogging Into a Legless Lizard

A dune system hides under the South Bay sidewalks, shrouding its animal residents in suburbia as well. With the El Segundo Sand Dunes rapidly paved over, the Southern California legless lizard lost its habitat to suburban development and scientists lost access to the private, urbanized property that might still host this sand-loving species that spends most of its life underground.

Discovering a legless lizard while jogging in North Hollywood led NHM Herpetology Curator, Greg Pauly, to see community science as a way to track species hanging on in urban environments, inspiring the RASCals (Reptiles and Amphibians of Southern California) project on iNaturalist to crowdsource sightings of urban reptiles.

Observations contributed to iNaturalist have been used by Pauly in over 20 scientific publications, sometimes with the original observer co-authoring the paper. If you want to help scientists to gain a better understanding of which reptiles and amphibians call urban L.A. home, contribute photos to the RASCals project.

Hunting for a Harvesting Ant

Farming has drastically changed L.A.’s natural landscape, and further urbanization threatens one of our region’s insect farmers: the California harvester ant. These red, large-sized native ants collect and disperse seeds, collecting seed waste around the entrance of their nests. These industrious insects are the preferred prey of the once widespread horned lizard.

While development and non-native ants like the Argentine ant have led to a decline of the species, California harvester ants can still be found in sunny, sandy parts of the city, around weedy grasses that make seeds, and in the sandy soils of chaparral-covered slopes and ridges. UNRC member and NHM Research Associate, Terry McGlynn, started the Harvester Hunt project on iNaturalist to learn where these industrious insects can still be found across the region. If you see some large ants wandering through the sidewalks and gardens of L.A., please snap a photo and upload it to iNaturalist.

A Community of Bat Detectors

For a long time, bat research in the L.A. area was limited to large open spaces. Which species populated the urban L.A. basin was a mystery. That was until Museum scientists partnered with urban and suburban community members—residents, schools, businesses, libraries, clubs, and others—and, equipped with bat acoustic technology gathered new intel about bat species distribution and activity in city habitats. (Each bat has a species-specific vocalization, a distinct call and pitch.)

Miguel Ordeñana, Wildlife Biologist and Senior Manager of Community Science who leads the Backyard Bats Survey project, said this crowdsourced community enterprise has led to the discovery of 12 species of bats in urban L.A., including four listed as Species of Special Concern by the California Department of Fish and Wildlife.

This year, the Museum has also led bat roost emergence counts. Like the acoustic survey, the roost count allows community members to connect with often-hidden wildlife while identifying human-made and natural structures bat species rely on for survival in our sprawling metropolis. 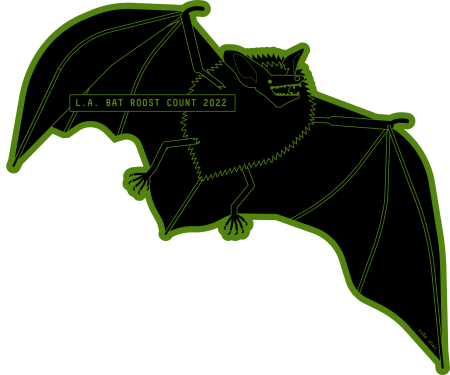 Both studies are ways for NHMLAC’s Urban Nature Research Center to collect unprecedented biodiversity data needed to inform policy and land management decisions for the benefit of conservation and connect city dwellers with their furry nocturnal neighbors. 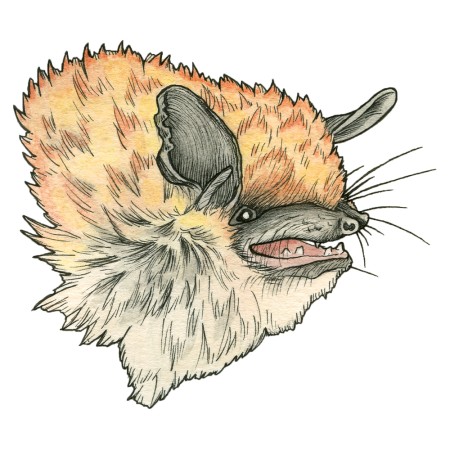 This specimen was collected in 1942 by Jack Couffer.
Photo by Kayce Bell

While they don’t have powered flight, they have a special membrane between their front and back legs which allows them to glide through the air between trees. Kayce Bell, NHMLAC’s Assistant Curator, Mammalogy (Terrestrial Mammals) says if you spot this creature, or other squirrels, you can contribute to the Southern California Squirrel Survey.

The San Gabriel chestnut snail, Glyptostoma gabrielense, is a land snail endemic to Los Angeles County that is currently known only from undisturbed vegetative habitats within and near the San Gabriel Mountains. If you’re ever on a walk in that area, look for a gray/blue body and a flat-coiling shiny reddish-brown shell about the diameter of a quarter.

The San Gabriel chestnut snail is one of the few Western North American snails within the ancient gastropod Family Megomphicidae, and one of only two species within its genus Glyptostoma. Since 1970, two populations and/or subspecies of G. gabrielense have been wiped out, one in the Dominguez Hills (also referred to as Glyptostoma newberryanum depressum) and another in Elysian Park.

Jann Vendetti, NHMLAC’s Associate Curator of Malacology, who oversees the project, Snails and Slugs Living in Metropolitan Environments (SLIME), says the boundaries of its current distribution are unknown, but iNaturalist records allow study and analysis of its habitat preferences and distributional range. This animal moves slowly, thus it is limited to undisturbed native habitat, and is likely also limited to living and eating among native plant leaf litter. Because populations are likely isolated from each other, that may mean they have low genetic diversity. It is unknown how these snails respond to fire, which has been prevalent across the entire range of this species in recent years.

If you see a snail or slug, take a photo and upload it to iNaturalist. Maybe your photo will help document the range of the San Gabriel chestnut snail, or one of the many other native and non-native snails and slugs in the region.

Planting for Pollinators and Preservation

In the middle of Westlake/MacArthur Park, Esperanza Elementary School has transformed itself into a refuge for wildlife. L.A. Audubon Society helped students turn asphalt into a native habitat, and NHM has helped teach students how to document the wildlife there through camera traps and iNaturalist. Los Angeles Unified School District is the largest landowner in L.A. so greening schoolyards like Esperanza’s can have an outsized effect on wildlife conservation.

Esperanza’s schoolyard habitat has become an attractor for all kinds of wildlife, especially birds. A burrowing owl like the one pictured above became their unofficial mascot after one spent several days in the yard. Students have been documenting all kinds of animals taking up residence in their yard, proving the effectiveness of the project as both a refuge for wildlife and a way to bring conservation into the classroom.

Participating in a community science project can be as easy as logging into iNaturalist and taking a walk outside, and you don’t need a schoolyard of your own (or several acres to dedicate to native plants like NHM's Nature Gardens) to make a positive impact on conservation.

With the right plant—and watering—our backyards can attract animals while cutting down on water use. Even a potted plant or two can help. Many native plants are drought tolerant with the added bonus that they’ll attract native pollinators. Managing our garden and home pests sustainably is another way we can help local wildlife.

Rodenticides often end up poisoning their natural predators, and insecticides commonly used garden insecticides tend to kill native insects, including many predatory species that would help control pests. Eliminating chemical pesticides in your own garden and home help protect wildlife for everyone.

If you plant it, they will come. Milkweeds like this (Asclepias fascicularis) attract Monarch butterflies, providing shelter for their eggs and food for their caterpillars. Just be sure to avoid the tropical milkweed which can cause problems for Monarch migration.

It takes more than individual effort to conserve our threatened natural habitats, and projects like the Liberty Canyon Wildlife Crossing, the tireless work of advocacy groups, along with state and federal legislation will be essential to meet our conservation goals. The immensity of the challenge can feel overwhelming, but focusing on what we can do as individuals can ground us in useful action.

Appreciating our biodiversity—both the incredible richness and the threat posed by our actions—underscores the interconnectivity between us and nature, and every step we take towards conservation leaves a trail for wildlife to follow.

NHMLAC's Community Science program is supported in part by Boeing.

Los Angeles is the birdiest county in the America
Read more
Wild L.A.

We've created a new kind of nature guide, and it's time share it with you!