On the Anniversary of Obergefell v. Hodges

The Importance of Marriage Equality in the LGBTQ+ Community

June 26th is the anniversary of the landmark United States Supreme Court decision, Obergefell v. Hodges, which made marriage equality the law of the land in the United States and confirmed that denying gay and lesbian couples the right to marry is unconstitutional. On this auspicious occasion, it is worth looking back to see how we got here and why the right to marry is so critical for many in the LGBTQ+ community to feel affirmed and validated. It is a right our community does not take for granted, and the recent history of being cruelly denied access to marriage equality informs us as we keep fighting for full legal and social equality for every member of the LGBTQ+ community.

Brief History of the Fight for Marriage Equality

The path to full marriage equality for LGBTQ+ couples in the United States has been long and winding. From civil unions to domestic partnerships, from San Francisco City Hall to the steps of the United States Supreme Court, queer couples have celebrated victories and endured defeat while persevering in the steadfast belief that our love and commitment is equal to that of our heterosexual counterparts.

To understand the highs and lows in the battle for marriage equality, we can look to our own history right here in California.

When California first entered the union as a state in 1850, marriage was defined as “a civil contract to which the consent of parties is required.” In 1872, this language was updated to state “[a]ny unmarried male of the age of 18 years or upward and any unmarried female of the age of 15 years old or upward are capable of consenting to and consummating marriage.” Despite the addition of the words male and female, the code did not define marriage as that between a man and a woman until the passage of AB 607 in 1977.  At that time, the legislature changed the definition of marriage to “a personal relation arising out of a civil contract between a man and a woman” in an intentional move to ban same-sex marriage. This move was further bolstered in 2000 by the passage of ballot proposition 22, informally known as the Knight Initiative, which added Section 308.5 to the Family Code, stating “[o]nly marriage between a man and a woman is valid or recognized in California.”

Just four years later, then San Francisco mayor, now California governor, Gavin Newsom surprised his supporters and detractors when he directed city officials to begin issuing marriage licenses to same-sex couples. According to Newsom, he decided to openly challenge the state’s definition of marriage after attending the 2004 State of the Union address in which former President George W. Bush threatened to back an amendment to the federal constitution that would ban same-sex marriage. In defense of his decision, Newsom cited the California Constitution’s equal protection clause claiming it rendered AB 607 and the Knight Initiative unconstitutional, thereby giving him the authority to grant marriage licenses to same-sex couples.

Anti-gay activists immediately filed suit in court, leading to a March 11th order from the California Supreme Court requiring city officials to cease and desist from issuing marriage licenses to same-sex couples, followed by an August 12th ruling that invalidated the marriage licenses issued between February 12 and March 11, 2004. This ruling impacted approximately 4,000 couples, including Phyllis Lyon and Del Martin – the first same-sex couple in the United States to receive a marriage license.

Additional legal challenges ensued over the years culminating in a final decision from the California Supreme Court in June 2008 that California marriage laws’ exclusion of same-sex couples violated the state constitutional rights to privacy, liberty, and equal protection under the law. Same-sex weddings began again at San Francisco City Hall and throughout the state until the November 4, 2008 passage of ballot proposition 8 – a Constitutional amendment to ban same-sex marriage in California – with just 52% of the vote. 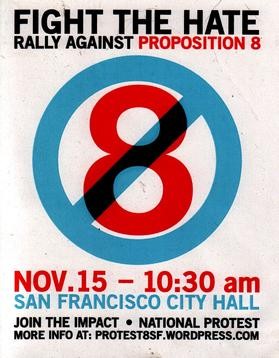 This time, proponents of marriage equality looked to the courts to invalidate Prop 8 based on the claim that due to its nature as a constitutional amendment, Prop 8 required a vote of the legislature before being placed on the ballot. Many legal battles ensued ultimately leading to the U.S. Supreme Court’s June 26, 2013 decision in Hollingsworth v. Perry that restored marriage equality for same-sex couples throughout the state and confirmed the validity of more than 18,000 marriages that took place prior to the passage of Prop 8.

While the ruling in Hollingsworth v. Perry was limited to the state of California, the Supreme Court issued two rulings related to marriage equality that day. The second ruling, in the case of the United States v. Windsor, struck down the federal 1996 Defense of Marriage Act. While this decision did not require states to allow same-sex marriage, it did require the federal government to recognize and provide benefits for same-sex couples who married in states where same-sex marriages were legal.

DC resident Crystal Canterbury celebrates with the crowds gathered outside the U.S. Supreme Court at the announcement of the ruling in Obergefell v. Hodges.
Ryan Costello

Just one year later, on June 26, 2015, the U.S. Supreme Court declared same-sex marriage legal in all fifty states through their ruling in Obergefell v. Hodges. As stated by lead plaintiff, Jim Obergefell, this decision “affirms what millions across this country already know to be true in their hearts: our love is equal, the four words etched onto the front of the Supreme Court – 'equal justice under law' – apply to us, too."

The Gay Men’s Chorus of Washington, DC sings The Star-Spangled Banner in celebration after the announcement of the U.S. Supreme Court’s ruling in Obergefell v. Hodges.
Crystal Canterbury

No union is more profound than marriage, for it embodies the highest ideals of love, fidelity, devotion, sacrifice, and family. …It would misunderstand these men and women to say they disrespect the idea of marriage. Their plea is that they do respect it, respect it so deeply that they seek to find its fulfillment for themselves. Their hope is not to be condemned to live in loneliness, excluded from one of civilization’s oldest institutions. They ask for equal dignity in the eyes of the law. The Constitution grants them that right.

According to the U.S. Census Bureau, more than a half-million same-sex couples are married. This figure represents an increase of nearly 70% since 2014, when the Defense of Marriage Act was struck down. As a member of the LGBTQ+ community, I am one of those 500,000+ couples, and as the Director of Special Events at the Natural History Museums of L.A. County (NHMLAC), I have the privilege of hosting weddings for fellow members of the LGBTQ+ community.

With the arrival of June and LGBTQ+ pride month, I spoke with my NHMLAC colleagues and some of the couples who have planned or are planning to host their weddings at the Natural History Museum of L.A. County on the topic of marriage equality. I noticed many of the same words kept coming up throughout these discussions - words such as validation, tradition, celebration, security, and recognition. As one past client, Derek Boeckelmann, said, “[Marriage equality] means having access to the same language, life experiences, and legal protections as any other American. He went on to say, “I also think – as much as maybe they shouldn't – words like ‘husband’ and ‘married’ give an immediate understanding of our relationship while ‘boyfriend’ or ‘partner’ can sometimes be misinterpreted by others. There's also a thrill in saying the word ‘husband’ that I hope never goes away.”

Derek Boeckelmann and Alex Kramer gather with their loved ones to sign their marriage license after the ceremony.

Alex Kramer and Derek Boeckelmann during their first dance in the North American Mammal Hall.

Derek Boeckelmann and Alex Kramer gather with their loved ones to sign their marriage license after the ceremony.

Alex Kramer and Derek Boeckelmann during their first dance in the North American Mammal Hall.

When asked about her upcoming wedding, NHMLAC Exhibitions Project Manager Molly Sjöberg had this to say: “For me, it’s about the legal protections. Without marriage, you are left legally exposed.” Sjöberg also explained that she and her fiancé are getting married in part for their daughter. By celebrating their marriage with a wedding ceremony and reception, she hopes to make it clear that they aren’t hiding anything and that their relationship is no different or less valid than the heterosexual relationships of other family members in her daughter’s life.

NHMLAC Exhibition Project Manager, Molly Sjöberg and her fiancé will be married in July 2021 in Molly’s hometown in New England.
Molly Sjöberg

Each couple also spoke on the topic of family and celebration. When asked what she was most looking forward to at her wedding, Sjöberg said that “it’s really important to me to be surrounded by family and friends, and I’m even more excited to see my fiancé bask in the love and support of the people around her.” Another couple, Neil Hultgren and Ryan Quan, who have postponed their upcoming wedding twice due to Covid-19 restrictions, had this to say: “We have been together for over ten years, but we wanted to bring together our family and friends, especially our parents and siblings, for a celebration. We like to have parties and gatherings at our home, and this seemed like a bigger version of those parties.”

After postponing their wedding twice due to Covid-19, Ryan Quan and Neil Hultgren will marry at NHM in July 2022.
Laura Casillas

I share these sentiments. When my wife and I married in June 2019, we hosted a wedding ceremony and reception for 80 of our closest family and friends at a restaurant in Hollywood. My wife had come out to her family only a couple of years before the wedding, so it was especially important to us to marry in an official ceremony in front of our friends and family. We wanted the legal protections of marriage, and even more importantly, we wanted to plan a celebration where we could have everyone we love from across the country gathered together to share in our joy. When reflecting on that day, my most cherished memories involve the moment when I first saw my wife in her gown and a moment in the ceremony when both of our mothers helped us physically tie the knot in a handfasting ceremony. Our journey to becoming out and proud members of the LGBTQ+ community was long, and I’m so incredibly grateful for the work of those who came before us that led to the decision in Obergefell v. Hodges.

Jackie Reimann and Morgan Champion pose for a photo after seeing each other in their gowns for the first time on their wedding day.
Natalja Kent, Two Moon Photography

The White House is lit in the colors of the gay pride flag on the night of the ruling in Obergefell v. Hodges.
White House Archived, Twitter

On the sixth anniversary of marriage equality, I ask each of you to celebrate the victory while continuing in the battle for true equality for every American so that we can all be more free.

More on the Author, Jackie Reimann

Jackie Reimann (she/her) is the Director of Special Events & Filming at NHMLAC and a member of the queer community. Prior to joining the museums, Jackie worked as the Director of Special Events at the Smithsonian’s National Museum of American History in Washington, DC. She is passionate about providing access to museums and other cultural institutions through events and has especially enjoyed working to ensure NHMLAC is an inclusive space for all LGBTQ+ couples. She lives in Los Angeles with her wife and their dog, Mowgli, and cat, Gus.