You Aren't Always What You Eat

Los Angeles, CA (September 17, 2021) — A new study led by Postdoctoral Research Scientist Dr. Keegan Melstrom at the Natural History Museum of Los Angeles County’s Dinosaur Institute ​​demonstrates new limitations to the biological concept of convergent evolution. Researchers working on the study compared the skulls of 156 species of crocodylians, lizards, and mammals to better understand the role of similar diets in convergent evolution, discovering that the evolutionary pressures of diet could only go so far in shaping animals’ skulls.

Convergent evolution, when animals independently acquire similar adaptations in response to similar needs despite being distantly related, is a hallmark of biology class. Picture the torpedo-shaped, aquadynamic bodies evolved independently by sharks, whales, and ichthyosaurs to navigate the oceans. When it comes to skulls, the authors realized that superficial similarities like the elongated snouts that help both canids and crocodylians consume large amounts of meat suggest that diet and the physical adaptations to support that diet could play a role in shaping skulls, even across groups separated by over 300 million years of evolution.

“A lot of previous research has discovered that diet plays an important role in determining skull shape in relatively closely  related animals, but surprisingly little work has looked at animals that are more distantly related. In animals that live in the water, it turns out that this pattern holds up, and we sought to test if the same was true in animals that lived on land,” says Dr. Melstrom.

Convergent evolution has been tested across smaller groups (orange box), but remains surprisingly untested in distantly related animals (blue box). This work shows that although there are some intriguing similarities between distantly related groups, mostly convergence does not occur.
Courtesy of Dr. Keegan Melstrom/NHMLAC

Examining such a wide swath of animals allowed the researchers to look for broad patterns of skull shape and push the limits of our understanding of convergence among amniotes. Using photographs and measurements of specimens’ skulls from natural history collections like NHM’s Herpetology Department, the team compiled data on aspects of skull shape and characters such as snout length, and the size and placement of orbits (eye sockets), teeth rows, and jaw muscles.

“We measured how the location of fundamental features of animal skulls (eye sockets, jaw joints, the tip of a snout) compare to one another. Understanding how these are similar (or different) to one another allowed us to test the effects of things like diet, size, and evolutionary relationships on skull shape,” says Dr. Melstrom.

The study found that both diet and size affect skull shape, but the vast majority of species retain unique aspects of their ancestral skull plan, limiting the morphological potential of distantly related animals to converge despite similar diets. Additionally, some animals develop unique skull shapes to eat similar diets.

“We found that despite some animals independently converging on similar skull shapes related to their diet, distantly related animals generally don’t. There are at least two reasons for this. The first is because mammals, lizards, and crocodylians are working from such different ancestral skull shapes that convergence in shape is not the optimal way to consume a particular diet. Secondly, when it comes to evolution, there is more than one way to solve a problem, so different groups often settle on different shapes to achieve a particular function,” says Dr. Melstrom. 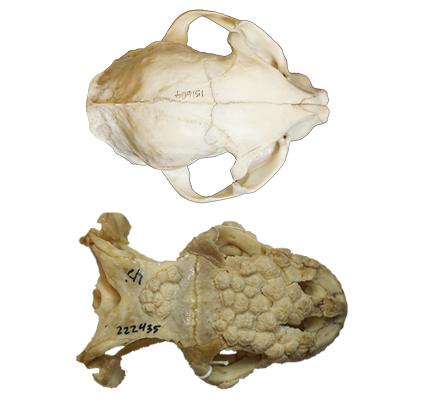 The skulls of both the cat (top) and Gila Monster (bottom) display short snouts adapted to maximize bite force despite being very distantly related. The cat’s snout is comparatively shorter despite both species’ similar diets.
Courtesy of Dr. Keegan Melstrom/NHMLAC

Some parallel changes in cranial shape occur in clades with distinct evolutionary histories but similar diets. For example, some carnivorous lizards (like the Gila Monster) and mammals independently evolved relatively short snouts to help maximize bite force, but lizards can’t seem to reach the same levels of short-snoutedness as some mammals.

The researchers found a lot of variation among species centered around the snout – ranging from the extremely elongated snouts of crocodylians to short, wide snouts of mammals. Animals that take to the air and sea (like bats and marine mammals) often have the most extreme cranial adaptations, suggesting that exploiting these environments requires more significant cranial modification.

The remarkably long and narrow snout of the gharial represents one extreme in skull shape variation.
Courtesy of Dr. Keegan Melstrom/NHMLAC

“It’s remarkable how much variation exists in the snout in our sample of animals, from the incredibly short face of bats to the extraordinarily long, narrow snout of the gharial,” says Dr. Melstrom. In the same vein, the distinctly narrow, flattened skulls of crocodylians reflect their specific lifestyle – ambushing terrestrial prey from the water – and helps produce high bite forces in aquatic conditions.

“Our study really brings home the fact that the shape of an animal’s skull is a complex mix of what it’s eating, its evolutionary history, its size and growth among a myriad of other factors. And because of this complexity, we can use these pieces of evidence to tell us about all sorts of aspects of extinct animals," says Dr. Melstrom.

The study’s findings complicate the notion that convergent skull shapes indicate a parallel convergence in diet, making broad generalizations across distantly related or extinct animals more difficult. At the same time, recognizing the limits of convergence means that detailed comparisons between closely related species can be even more revealing within the context of their ancestral conditions.

This study originated as part of Dr. Melstrom’s PhD dissertation at the University of Utah. A National Science Foundation Graduate Research Fellowship and The Field Museum of Natural History helped fund this research, and Dr. Melstrom’s Post-Doctoral position is funded by the NHMLAC Dinosaur Institute.

About the Natural History Museums of Los Angeles County
The Natural History Museums of Los Angeles County (NHMLAC) include the Natural History Museum in Exposition Park, La Brea Tar Pits in Hancock Park, and the William S. Hart Museum in Newhall. They operate under the collective vision to inspire wonder, discovery, and responsibility for our natural and cultural worlds. The museums hold one of the world’s most extensive and valuable collections of natural and cultural history—more than 35 million objects. Using these collections for groundbreaking scientific and historical research, the museums also incorporate them into on- and offsite nature and culture exploration in L.A. neighborhoods, and a slate of community science programs—creating indoor-outdoor visitor experiences that explore the past, present, and future. Visit NHMLAC.ORG for adventure, education, and entertainment opportunities.