Rodents of the Caribbean

Los Angeles, CA (July 15, 2021)—Just how mammals made their way to the Caribbean has been hotly debated, with relatively little evidence recovered from the fossil record. In a paper published today in Papers in Palaeontology, Natural History Museums of Los Angeles County (NHMLAC) scientist Dr. Jorge Velez-Juarbe, Associate Curator of Marine Mammals, and an international team of scientists describe a new species of rodent that lived in Puerto Rico 29 million years ago. Identified by its distinct molars, Caribeomys merzeraudi is one of the oldest fossil rodents discovered on Puerto Rico and the first originating from North America, challenging our understanding of the origins of endemic Caribbean rodents.

“At first we were puzzled as to what kind of mammal these tiny teeth belonged to. Particularly, because all previous discoveries pointed to a South American origin for (most) Caribbean mammals, and these new teeth did not look like anything from that continent,” said Dr. Velez-Juarbe.

Despite having an estimated mass of only 100 grams, the tiny rodent has a big story to tell. Until this discovery, fossil rodents found in the Caribbean islands were exclusively South American in origin, supporting the idea that rodents reached the archipelago exclusively from that continent. The new species' North American origins contradict long-held but contentious understandings of how rodents initially populated the islands. 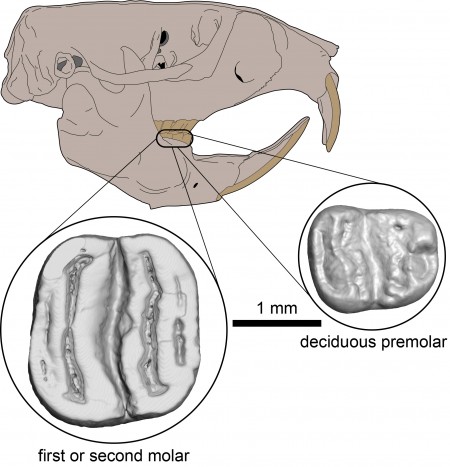 “The teeth show telltale features shared with other geomyin rodents, like having bilobed molars, but they also show a unique arrangement of some of the cusps, and have unusually thick enamel,” Dr. Velez-Juarbe says.

These features set C. merzeraudi apart from its relatives, and could indicate these rodents belonged to a distinct West Indian branch that evolved in isolation over several million years, said study co-author Lazaro Viñola Lopez, a doctoral student in vertebrate paleontology at the Florida Museum of Natural History.

While the fossil teeth are distinct enough to have allowed Dr. Velez-Juarbe and his team to name C. merzeraudi as a new species, they share some similarity to modern rodents like kangaroo rats, pocket mice, and pocket gophers found in Central and North America. The new species’ teeth point to a divergence from its mainland counterparts some 33.9 million years ago at the Eocene–Oligocene transition. The discovery of these minute molars also raises new questions about mammals’ path to the Caribbean archipelago.

“Besides the arrival of island shrews to the islands from North America in the late Cretaceous, all other endemic terrestrial mammals arrived sometime between the late Eocene (~33.9 Ma) and the mid Miocene (~13 Ma) from South America. This new finding suggests an additional pathway, so we should expect to find more discoveries like this one,” says Dr. Velez-Juarbe.

The new species is now housed at the Natural History Museum of Los Angeles County, having been unearthed at lower Oligocene deposits of Puerto Rico’s San Sebastian Formation which captures the island’s inhabitants of 29.5 million years ago. Found at a paleontological site along the Rıo Guatemala next to the other oldest Caribbean rodents, C. merzeraudi’s discovery is the result of fifteen years of ongoing fieldwork at that site conducted by Dr. Velez-Juarbe and in more recent years with his colleagues as part of the GAARAnti Project, an international endeavor looking to reconcile the geological history of the Caribbean islands with the story of their population by land animals through wide-ranging, innovative research.

Location and geological maps of the LACM loc. 8060 fossil-bearing locality. A, the locality (yellow star) is located in the Rıo Guatemala, which flows through the township of San Sebastian, Puerto Rico (West Indies).
The Palaeontological Association

“We're working on securing new funding to return and continue collecting. In particular, I'm interested in exploring other units found in this site in search of other vertebrates (particularly small ones like the rodents and coqui frogs), plants, and invertebrates, all with the aim to get a more complete picture of the terrestrial and coastal flora and fauna of Puerto Rico during the Oligocene,” says Dr. Velez-Juarbe.

The French National Research Agency and the Center for the Study of Biodiversity in Amazonia, also known as LabEx CEBA, funded the research.

About the Natural History Museums of Los Angeles County
The Natural History Museums of Los Angeles County (NHMLAC) include the Natural History Museum in Exposition Park, La Brea Tar Pits in Hancock Park, and the William S. Hart Museum in Newhall. They operate under the collective vision to inspire wonder, discovery, and responsibility for our natural and cultural worlds. The museums hold one of the world’s most extensive and valuable collections of natural and cultural history—more than 35 million objects. Using these collections for groundbreaking scientific and historical research, the museums also incorporate them into on- and offsite nature and culture exploration in L.A. neighborhoods, and a slate of community science programs—creating indoor-outdoor visitor experiences that explore the past, present, and future. Visit NHMLAC.ORG for adventure, education, and entertainment opportunities.