Per L.A. County Department of Public Health, masks must be worn at all times indoors and in NHM's outdoor Spider Pavilion. NHMLAC currently does not require visitors to show proof of vaccination. We are working through the implications of the LA City ordinance with respect to our operations. View our COVID-19 Safety Guidelines for more information. 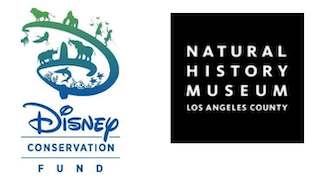 With the additional funding provided by Disney Conservation grant, NHMLAC will partner with residents in underrepresented neighborhoods of L.A. County to track and record bat activity through community science-based acoustic monitoring and roost mapping, continuing the first large-scale study of bats in urban and suburban habitats to inform the Backyard Bat Survey. Community science is a discipline that engages volunteers from the public to advance real scientific projects. By studying and monitoring the local bat species, thousands of city dwellers will not only provide essential data for conservation focused policy decisions, but they will also be inspired to become stewards of their environment.

“We are grateful for the continued support of the Disney Conservation Fund, which makes it possible for us to expand current bat research and education initiatives in addition to tackling new questions, such as where are they roosting, that put us in a better position to inform conservation action and policy,” said Miguel Ordeñana, the Principal Investigator for the Survey. “More specifically, the grant will allow us to continue using innovative acoustic technology that record species-specific bat echolocations, and allows us to team up with more families, schools, parks and now libraries. The new community science roost mapping project will allow us to pursue questions that address the interests of both conservation professionals and local residents. Additionally, Disney's funding will allow us to offer two paid summer internship opportunities for an early environmental career professional from the local community who identifies as Black, Indigenous, or a Person of Color.”

“We are so grateful to receive the Disney Conservation Fund grant in support of our own Miguel Ordeñana’s project to expand the research of hibernating and roosting behavior of L.A. bats,” said Dr. Lori Bettison-Varga, President and Director of the Natural History Museums of Los Angeles County. “We are museums of, for and with L.A. and this survey is foundational to learning more about the biodiversity of Los Angeles and continuing to build partnerships with our neighbors through ongoing engagement with our community science initiatives.”

Since 1995, the Disney Conservation Fund has inspired millions of people to take action to protect the planet and has directed more than $100 million towards saving wildlife in more than half the countries in the world through efforts that engage communities in conservation.

Disney Conservation Fund and the Natural History Museums of Los Angeles County are working together to protect the magic of nature for future generations to enjoy. Together, they are committed to conserving urban sensitive species such as the western red bat, southern yellow bat, western mastiff bat, hoary bat, and small-footed myotis which have already been detected through the study. With the support of the Disney Conservation Fund, the Backyard Bat Survey is creating inclusive community engagement strategies and foundational scientific knowledge upon which all future Los Angeles bat studies can build from. Working with community scientists, project researchers confirmed the presence of seven bat species in L.A.'s urban core this past year; analysis suggests the possibility of an additional two. These discoveries confirm the project hypothesis that highly urban regions of Los Angeles, such as South L.A., are not devoid of nature as commonly thought but are instead rich in bat activity which is a positive indicator of ecosystem health. The next period of the Survey will run from October 2020 through October 2022. Learn more about the Disney Conservation Fund and how it is helping to save wildlife, inspire action and protect the planet by visiting Disney.com/conservation. Learn more about NHM’s Backyard Bat Survey by visiting nhm.org/community-science-nhm/backyard-bats.

About Miguel Ordeñana, NHMLAC Manager, Community Science
Miguel Ordeñana, who joined NHMLAC in April 2013, is an environmental educator and wildlife biologist. As a community science manager, Miguel promotes and creates community science projects, and recruits and trains participants. Miguel utilizes his mammal research background by conducting urban mammal research in L.A. and co-leads NHMLAC’s Southern California Squirrel Survey. Miguel continues to work, locally and internationally, on carnivore and bat research, including a jaguar conservation program in southwestern Nicaragua. He holds a bachelor’s degree in Environmental Studies from the University of Southern California, and a M.S. in Ecology from  University of California, Davis.

About the Natural History Museums of Los Angeles County
The Natural History Museums of Los Angeles County (NHMLAC) include the Natural History Museum, La Brea Tar Pits, and the William S. Hart Museum. They operate under the collective vision to inspire wonder, discovery, and responsibility for our natural and cultural worlds. The museums hold one of the world’s most extensive and valuable collections of natural and cultural history—more than 35 million objects. Using these collections for groundbreaking scientific and historical research, the museums also incorporate them into on- and offsite nature and culture exploration in L.A. neighborhoods, and a slate of community science programs—creating indoor-outdoor visitor experiences that explore the past, present, and future. Visit NHMLAC.ORG/connects–a digital portal through COVID-19 closure–for adventure, education, and entertainment opportunities.