The museum at La Brea Tar Pits and the William S. Hart museum will remain closed until further notice. Advanced tickets are required for entry to NHM’s Spider Pavilion, and are now available online. See NHMLAC's response to coronavirus (COVID-19).

Los Angeles, June 6, 2019 – Dr. Lori Bettison-Varga, President and Director of the Natural History Museums of Los Angeles County (NHMLAC), today announced the beginning of a long-term initiative to reimagine and renovate one of the institution’s most prized components: its 13-acre campus in Hancock Park, encompassing the world-renowned La Brea Tar Pits and the George C. Page Museum.

The project for a comprehensive reimagining of this uniquely important campus will begin with the development of a creative master plan, undertaken to advance NHMLAC’s scientific research and public engagement for the next half-century. Dr. Bettison-Varga announced the inauguration of master planning at an “ideas incubator” held today at La Brea Tar Pits and the nearby El Rey Theatre, where NHMLAC convened more than seventy leading figures from the fields of science, the arts, design, entertainment, education, technology, communications, philanthropy, and government for a day of open-ended discussion that will inform and kick-start the design process.

Dr. Bettison-Varga also revealed the names of the three architect-led teams that will compete for the assignment of leading the master planning team. Dorte Mandrup (Copenhagen), WEISS/MANFREDI (New York) and Diller Scofidio + Renfro (New York) were selected through a process that began in March 2019. The three firms will develop conceptual approaches to the project, which NHMLAC will unveil for public comment in late August 2019. On the basis of its own review and the public’s feedback, NHMLAC expects to announce its chosen firm toward the end of 2019. The firm will then lead a multi-disciplinary creative team through a public engagement, master planning, design and construction process over the next several years.

Dr. Bettison-Varga said, “La Brea Tar Pits and the Page Museum are the only facilities of their kind in the world—an active, internationally renowned site of paleontological research in the heart of a great city, and a museum that both supports the scientists’ work and helps interpret it for more than 400,000 visitors a year. We are excited to seize this once-in-a-lifetime opportunity to not just renovate these facilities thoroughly but also to think deeply about how to make them function as well for neighbors and guests over the next 40 years as they have for the last 40—perhaps, even better. It’s an adventure that starts now, with the blue-sky thinking of our Ideas Incubator, and will continue with the work of three of the best architecture and design teams in the world—and the input of Angelenos as well. We look forward eagerly to seeing the concept proposals and hearing from our community.”

The Natural History Museums of Los Angeles County are a public / private partnership with the County of Los Angeles, which owns the 23 acres of Hancock Park, including the 13-acre parcel managed by NHMLAC. Los Angeles County Supervisor Sheila Kuehl said, “La Brea Tar Pits and the Page Museum are enormously popular and valuable cultural assets for the County, attracting neighbors, school children from across the metropolitan area, and visitors from around the world. The Tar Pits are known everywhere as a visual symbol of the cultural and long natural history of Los Angeles. The Board of Supervisors is proud to support this forward-thinking effort by the Natural History Museums to create a vibrant and engaging future for this exciting and important public resource.”

To reimagine La Brea Tar Pits, NHMLAC directed the architects to assemble teams that include not only architects and landscape architects, but scientists, engineers, designers and artists. The three finalists were selected based on the overall quality and character of their response to a Request for Information, their design approach, their previous experience and team strength, references and project approach.

From Copenhagen, Denmark, founder and creative director Dorte Mandrup and her team at Dorte Mandrup are known for their sensitive yet dynamic approach to culturally significant sites. Their work includes five UNESCO World Heritage Sites, ranging from a museum and visitor center by the Icefjord in Greenland, to three visitor centers by the Wadden Sea coast in Denmark, Germany and Netherlands and a library in the UNESCO protected Swedish baroque city, Karlskrona. Their team includes landscape architect Martha Schwartz Partners, visual designers Kontrapunkt, LA based executive architects Gruen Associates and engineering firm Arup.

Marion Weiss and Michael Manfredi, founders and principals of New York-based WEISS/MANFREDI Architecture/Landscape/Urbanism, have seamlessly married architecture and landscape in a series of landmark projects that among others includes the Brooklyn Botanic Garden, the Museum of the Earth, and the renowned Olympic Sculpture Park in Seattle. Their team includes brand and graphics designer Michael Beirut, paleobotanist Dr. Carol Gee, artist Mark Dion and Los Angeles-based Emmy Award-winning designer Karin Fong of Imaginary Forces.

The Campus
The only active paleontological research facility in the world that is located in a major urban area, La Brea Tar Pits is situated within the eastern portion of Hancock Park in Los Angeles’s Miracle Mile district. Since research began in 1913, the Tar Pits have yielded millions of samples, including saber- toothed cats, dire wolf and mastodon skeletons, innumerable plants, small rodents, and insects, and new discoveries are made daily in the Tar Pits open-air excavations. These collections constitute an unparalleled resource for understanding environmental change in Los Angeles, and the planet, during the last 50,000 years of Earth’s history.

The George C. Page Museum, designed by Los Angeles architects Frank Thornton and Willis Fagan, opened in 1977. Burrowed into the earth to preserve as much of the landscape as possible, it has sloping, grass-covered exterior walls, which are a beloved feature of Hancock Park, and is surmounted by a 10-foot-high, 4-sided fiberglass frieze of Ice Age landscapes, plants, and mammals, created by the sculptor Manuel Paz. The 57,000-square-foot-museum’s collections number more than 2 million specimens. Because of the building’s shape and underground siting, however, the museum is difficult to modify and expand, to the detriment of its programs in exhibition, education, research, and storage. 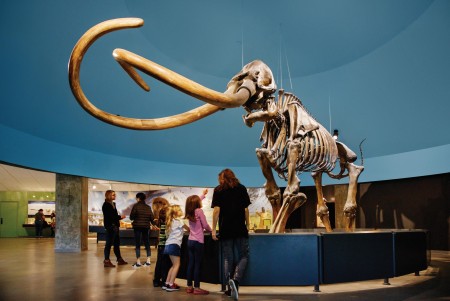 In addition to the Tar Pits and the museum, the campus comprises several active digs, an Observation Pit building from the 1950s (refurbished in 2014), a concession building, simulated Pleistocene landscapes, and contemporary gardens.

Over the past few years, NHMLAC has made an ongoing series of improvements and enhancements to the Tar Pits, the museum and its portion of the park. The next in the series will be an Augmented Reality experience, to be introduced in summer 2019, and installation of the Second Home Serpentine Pavilion by SelgasCano (June 28 to November 24, 2019) as a celebration of architectural design and a temporary site for free public events. The master planning process will be the beginning of an initiative to improve the entire campus, which has not been renovated comprehensively in more than fifty years.

About the Natural History Museums of Los Angeles County
The Natural History Museums of Los Angeles County (NHMLAC) include the Natural History Museum in Exposition Park (NHM), La Brea Tar Pits, and the William S. Hart Museum. They operate under the collective vision to inspire wonder, discovery, and responsibility for our natural and cultural worlds. The museums hold one of the world’s most extensive and valuable collections of natural and cultural history—more than 35 million objects. Using these collections for groundbreaking scientific and historic research, the museums also incorporate them into nature and culture exploration in L.A. neighborhoods, and a slate of community science programs—creating a natural history museum experience that explores the past, but increasingly addresses the present and the future. Learn more here.

About La Brea Tar Pits
The asphalt seeps at La Brea Tar Pits are the only consistently active and urban Ice Age excavation site in the world. This makes the site a unique window into active science—where fossils are discovered, prepared, researched, and displayed in one place. Outside, visitors can watch excavators unearth fossils of the wildlife trapped in the seeps. Inside the Museum, scientists and volunteers clean, repair, and identify those very fossils. The best specimens are displayed and available for research: from extraordinary saber-toothed cats, giant sloths, dire wolves, mammoths, and mastodons—to microfossils of small animals and plants. These collections constitute an unparalleled resource for understanding environmental change in Los Angeles, and the planet, during the last 50,000 years of Earth’s history.

Dorte Mandrup
Dorte Mandrup is a Danish architecture studio specialized in ambitious landmark projects for irreplaceable places of great importance to our world heritage. The studio designs architecture from an artistic point of view, with an ability to evoke the identity of fragile places and actively involve the surrounding nature or urban context. Rooted in Scandinavian heritage, the team naturally considers all human scale aspects in their approach to creating sustainable, conceptual and artistic architectural solutions. Dorte Mandrup’s work has received national and international acclaim, such as the The Green Good Design Award by The Chicago Athenaeum and in 2019 she was chairwoman of the EU Mies van der Rohe Award. She is Vice Chairman of the Louisiana Museum of Modern Art, member of the Historic Buildings Council, Adjunct Professor at The Royal Danish Academy of Fine Arts, and acts as frequent visiting professor including in 2018 at Cornell University College of Architecture, Art, and Planning. As a frequent voice in public debate, she is well known for her commitment to the development of the architectural profession and its role in society. For more information visit www.dortemandrup.dk

WEISS/MANFREDI Architecture/Landscape/Urbanism
WEISS/MANFREDI Architecture/Landscape/Urbanism is at the forefront of architectural design practices that are redefining the relationships between landscape, architecture, infrastructure, and art. Named one of North America's "Emerging Voices" by New York’s Architectural League, WEISS/MANFREDI won the 2018 Cooper Hewitt Smithsonian Institution’s National Design Award as well as the New York AIA Gold Medal, and the Academy Award in Architecture from the American Academy of Arts and Letters. Most recently, WEISS/MANFREDI was honored with the Mercedes T. Bass Landscape Architects in Residence Fellowship at the American Academy in Rome. The firm's cross-disciplinary projects include the Seattle Art Museum's Olympic Sculpture Park, recognized as one of Time Magazine’s Ten Best Architectural Marvels, the Brooklyn Botanic Garden Visitor Center, Penn’s Center for Nanotechnology, the Women’s Memorial at Arlington Cemetery, the Museum of the Earth, and the recently opened Hunter's Point South Waterfront Park. They are currently working on the US Embassy in New Delhi, India. For more information visit weissmanfredi.com.

Diller Scofidio + Renfro (DS+R)
Founded in 1981, Diller Scofidio + Renfro is a multidisciplinary design studio with a focus on cultural and civic projects. Based in New York, the studio is comprised of over 100 architects, designers, artists and researchers, led by four partners—Elizabeth Diller, Ricardo Scofidio, Charles Renfro and Benjamin Gilmartin. Their work has been distinguished with the first MacArthur Foundation fellowship awarded in the field of architecture, Time Magazine's "100 Most Influential" list, the Smithsonian Institution's 2005 National Design Award, the Medal of Honor and the President's Award from AIA New York, and Wall Street Journal Magazine's 2017 Architecture Innovator of the Year Award. Recent projects include The Shed in New York; The Broad, a contemporary art museum in Los Angeles; and the 35-acre Zaryadye Park adjacent to the Kremlin in Moscow. This year, the studio will open an expansion of The Museum of Modern Art (MoMA) in New York. For more information visit dsrny.com.