Little Flies in the Big City: What You Find Depends on How You Look

A group of researchers from the U.S. and Australia have announced the completely unexpecteddiscovery of exotic “vinegar flies” (drosophilids) in urban Los Angeles

April 7, 2015. A group of researchers from the U.S. and Australia have announced the completely unexpected discovery of exotic “vinegar flies” (drosophilids) in urban Los Angeles in a paper appearing in the journal PLOS ONE, titled “Strange Little Flies In The Big City: Exotic Flower-Breeding Drosophilidae (Diptera) In Urban Los Angeles.”

Two species, previously known only from outside the U.S., were collected by the Natural History Museum of Los Angeles County project, Biodiversity Science: City and Nature (BioSCAN). “I was as surprised as anyone when such unusual flies were found in our samples,” said Brian Brown, NHM Entomology Curator and one ofthis study’s authors. “But urban biodiversity is an almost unknown frontier.” 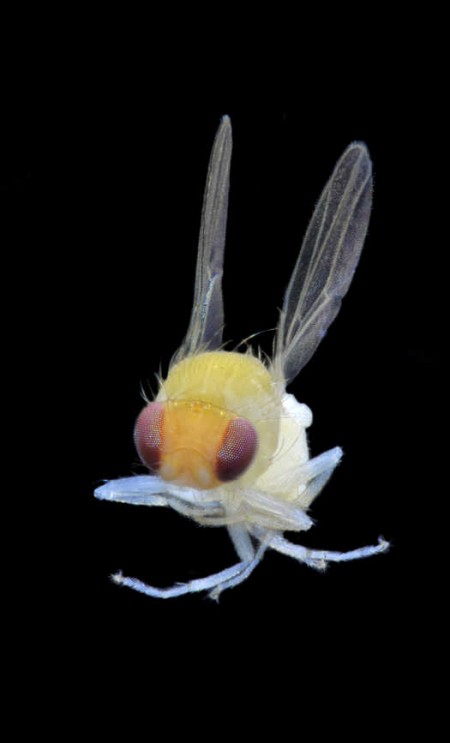 Flies in the insect genus Drosophila (the “fruit” flies, more accurately called“vinegar flies”) are among the world’s most-studied organisms — over 16,000 research papers were published in the last five years with the word“Drosophila” in the title. “Drosophila” is probably the only insect genus name most people have heard. Yet we still know little about their natural history, this study shows.

One of the newly-noted species, Drosophila gentica, is the second-most common fruit fly in the Los Angeles BioSCAN traps. This species was described in 1962 based on specimens collected in El Salvador in 1954, the first and last time it’s been recorded anywhere until now. “Los Angeles is definitely not the first place I’d have started looking for new specimens of this species,” said David Grimaldi, Curator at the American Museum of Natural History in New York, also an author on the paper.

How could these species of one of the world’s most studied organisms have escaped notice for so long in a place like Los Angeles? It all depends on how you look. Previous surveys used fruit or other baits to catch vinegar flies. This study’s authors think that may be why these species were missed — both of these newly- noted flies breed on flowers, not fruit. This study uses a tentlike insect trap called a “Malaise trap”, thirty of which are housed in L.A. backyards, two gardens (including the NHM Nature Gardens), and one school. “The citizen scientists that host these traps share in the credit for this discovery,“ said Brown,” as do the Museum and the Seaver Foundation, both of whom fund the BioSCAN project.”

About the Natural History Museum
The Natural History Museum of Los Angeles County is a national leader in research, exhibitions and education. The Museum was the first dedicated museum building in Los Angeles, opening its doors in 1913. It has amassed one of the world’s most extensive and valuable collections of natural and cultural history — with more than 35 million objects, some as old as 4.5 billion years. For more information, visit the Museum’s website at www.nhm.org or call (213) 763-DINO.